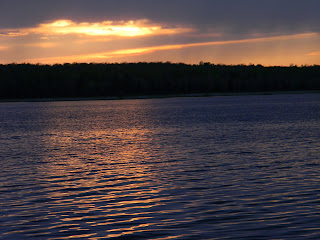 Nothing beats a Crandon sunset! I had a great Memorial Day weekend up north. The weather wasn't as good to us as we hoped for, but we made the best out of it! We had a few chances to get out on the water to try to catch some fish, but unfortunately we were unsuccessful. In a way, that's fine by me because I was very much content with being on a boat and listening to the waves and the birds chirp all around me. Plus, I had my camera, which gave me a great opportunity to play photog this weekend! 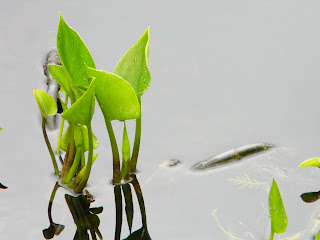 I'm posting my favorite shots of the weekend. I didn't get as many photos as I would have liked, but I was lucky to get a few winners out of the one's I took. I just love the color of the photo above. The dull lake, loaded with Iron, making the water brown...while a beautiful green leaf appears, standing out and asking for attention. Most of the time I was up there, I was just soaking in the sounds and the views. I took a couple videos of the waves and the birds chirping, and also a thunderstorm that was in the distance. But my favorite thing to take a picture of by far is eagles & birds... 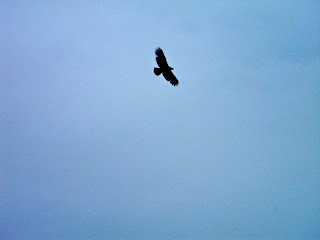 This shot is of a Golden Eagle...the first time I have ever seen one! We went to Pickeral Lake to go fishing and as we were launching our boats, I seen this guy far off in the distance. I was in the car and could see him far up into the trees! I wasn't able to get a good shot of him at the launch, but as we hit the lake, he showed back up, and much closer than before! You could tell this guy was hungry because he was circling around and eventually found some food. One thing that I dislike about this photo is that you aren't able to see his coloring. But anyway, the sight of him was purely amazing! 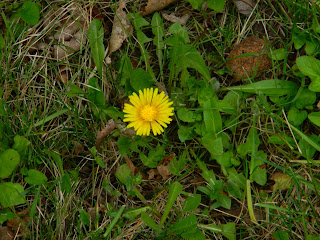 These guys were EVERYWHERE in Crandon. There were acres and acres of these beautiful dandelions bloomed all over the place. I wanted to pick as many as I could and save them for a future product of mine. If you didn't already know, dandelions have wonderful healing properties that can be used broadly. And what's nice about this particular herb is that all parts of this plant can be used for different things. So it's certainly something to look into! And what's nice about them is that almost everyone has them in their back yard! I will be using this herb in my shop very soon, and please keep an eye open to see what it is. <3
Posted by Rachel at 11:28 PM No comments: 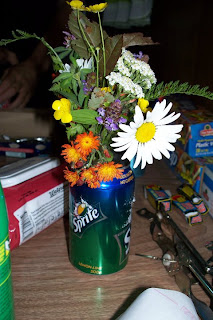 Just think...24 hours from now I will be in the very place that I have been wanting to be for the last 8 months now. I feel so much love for this place, almost more than any love I have ever experienced in my life. This place is so special to me. Last summer, the first time going to Crandon, WI, I experienced an out of body moment. I can't even begin to describe what happened or how it happened. But my perception of life had at that moment forever changed. I seen everything from a different perspective, my heart got lighter, I began to fear nothing and I loved everything around me. I loved feeling the wind brush up against my face, gently moving my hair from side to side. To see the blue dragonfly land on my shoulder and to welcome my new buddy with a simple smile. To catch my first fish, and not be scared to hold him and let him go back to his home in the water. To see an endangered animal swoop down from the sky into the lake to catch a fish and fly away. I could go on and on. I wish everyone could experience this, and to think that tomorrow, I will be back there again, to see wildlife at it's finest. To be at the place that made me stronger and want to wake up after two people I loved dearly left my life. Crandon helped me survive, and tomorrow, I'm going to say thank you <3

I know I will get loads of inspiration for my shop and if I can, I will update. If not, I will take loads of pictures and share them with you all on Monday! <3 Happy Memorial Day and thank you all that have served and lost your lives defending my freedom. I am forever in your debt...
Posted by Rachel at 11:23 PM No comments: 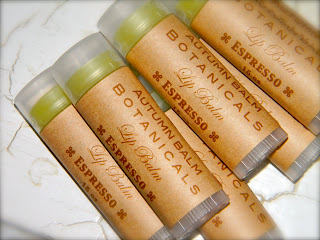 Espresso <3
This lovely balm I just created about an hour and a half ago. I think this one is combating with Cherry Bomb to be my first place favorite. I just love how this smells, and I know that as the days go on, the smell will only get sweeter. I have a few new one's I'll be crafting in the next few days...Vanilla Bean...Mango'd for Strawberries...Lemon Pound Cake...and that's all I'm telling you all for now :p I will be having a gift set up for sale in the near future as well. I have a muslin bag that I hand painted leaves on for a cool fun vibe! Those will sell for 10 dollars for 3 balms of your choice! <3
Posted by Rachel at 10:07 PM No comments: 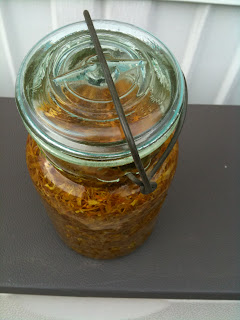 Well along with growing my cute little herbal garden, I've been letting this little concoction infuse in the daily sunlight outside everyday. This is olive oil packed with Calendula flowers. Two weeks in the sun, strain, pack a new set of petals, and another two weeks in the sun & wala! An awesome herbal remedy. I will be using this special oil for my salves, as well as my medicated balm. Will be a few more weeks before you see those items in my shop, but I assure you, they will be AWESOME! I'm so excited about it! Now time to go back to drinking this awesome hot cup of apple cinnamon tea <3
Posted by Rachel at 9:16 PM No comments: 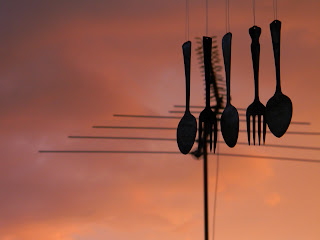 I just love spring. It's so exciting to see the flowers you've planted by hand start to grow. To first see them as seeds, then to watch those seeds open up to find a tiny green leaf peering out of the soil. It's a huge feeling of accomplishment to see that something you decided to birth is growing right before your eyes. I've never really planted anything before, at least not from scratch. So this is all new to me and man, does it feel awesome. Everyday when I look outside at my babies, they grow each more everyday. I can't wait to see them in full bloom! I will be taking some pics of them, either today or tomorrow, in their infant state. I was driving down the road yesterday and I finally noticed that all the trees have bloomed and are now fully green. I love how one day they are bare, and the next they are full of life. Our planet is something to definitely take pride in. It's something we should not take for granted and I hope that mankind can really change how they are negatively effecting our Earth. I would hate to see us destroy our home by our own selfishness. The Earth is far too beautiful to let die because of useless material things. I've really started to appreciate the planet more and more each day and I feel so much better because of it. The photo above I took a few days ago on my porch. The sky was beautiful that evening, with storms on their way. I just love spring weather. <3
Posted by Rachel at 5:22 PM No comments:

Email ThisBlogThis!Share to TwitterShare to FacebookShare to Pinterest
Labels: Inspiration 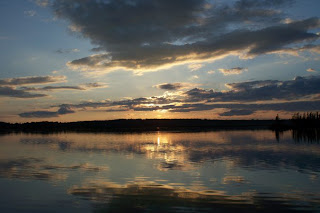 Well, thanks to my best friend, I had sold quite a few balms to a couple ladies at Walgreens! I'm very excited that I'm getting wonderful feedback on my formula. It's such an amazing feeling to know that someone appreciates your hard work and isn't afraid to let you know that you've done a great job. I already have to order more tubes because I'm almost out! Which I honestly have to say is kind of scaring me because I want to make sure I have enough on hand incase I need to make more of something (ahem....green apple). I have this wonderful formula for a medicated balm that's been floating around in my head for weeks that I can't wait to bring to reality! I hope it's just as good as I think it's going to be!!

I just got off the phone with my cousin not too long ago. She just informed me that our trip to Crandon, WI is indeed next weekend (HOORAY!!!!). I am sooooooo incredibly excited to go up there. It's like a place you've only imagined... There is just something about breathing in fresh air and being away from the city... I know my mind will truly run wild up there and I hope to come back home with some wonderful new ideas (and maybe some plants to use, too). I will take lots of pictures and will hopefully share some of my inspiration with you all! I can't even begin to portray the excitement I am feeling right now about going up there. It's like nothing else. We don't have running water or a bathroom, we stay in a cabin full of people, catch lots of fish and soak up the sun! How fun is that?? We are in a cabin secluded in the woods up north filled with wonderful wildlife, fresh air! & most importantly...FAMILY. I'm so excited. I wish everyone could experience Wisconsin at it's finest...

Ps. the photo attached is from Crandon last summer during the sunset. I thought I'd share this with you all...
Posted by Rachel at 9:59 PM No comments: 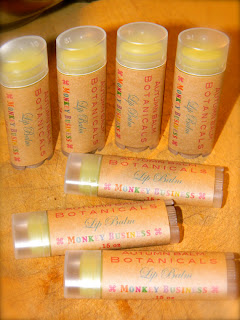 Hello there. I just recently started my own balm shop, along with my mom, Joy. I decided for this to be a balm company (all types of products in the balm form, and some others, too) because it's something I have loved for the longest time & I wanted to create something all natural and up to my high standards. I'm making lip balms, salves, cuticle creams...you get the idea. I've been having so many ideas float through my mind since the start of this, I hope I actually have enough time to bring this stuff to reality. I will be updating here every so often to let you know the process of my shop!! I made a new balm last night (well, I guess they all are new LOL) called "Monkey Business". It also goes as "Monkey Farts", but I wanted to add a twist to it :) I'm very excited about this one! I made the label super fun and funky. I think this balm will be great for everyone, especially kids. I want everyone to stay tuned, I will be posting on here for free give away's every so often, so keep an eye out because you may win some awesome goodies!!! <3 and incase you were wondering, you can check out my shop here: http://www.autumnbalmbotanicals.etsy.com/
Tanks <3
Posted by Rachel at 12:12 PM 1 comment:

All photos, unless otherwise noted, are taken by moi. Feel free to share any of my photos, but PLEASE make sure to leave a link back to that photograph.
D a n k a. I make all natural gluten free beauty products for your body from scratch. I have three Siamese kitties - Benny, Bentley and Bogart as well as a Cocker Spaniel - Lady Jane.
Photography is my long lost hobby. I love to crochet, collect books, owls, notebooks and other vintage finds.
Laughing is my medicine and nature is my happiness. Welcome to my blog.

My Favorite Blogs and Sponsors 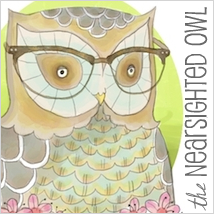